Well that’s New Zealand done and dusted. Our time here has been amazing and we are extremely sad to be leaving, as it’s become our home away from home. We loved every minute of our time here so we’ve put together a list of what we think are some of the best things New Zealand has to over.

We were lucky enough to arrive into Queenstown right at the start of the ski season and took advantage of it right away. We recommend:

Both are easily accessed from Queentowns and have buses running from the city center. We spent most of our time at Remarks but actually preferred Cardrona once we eventually made our way over there.

A loop pedal artist from Wellington, who is well worth checking out. I don’t remember how I found out about Graeme James, but I feel like a fan girl whenever I hear he’s in town. His music is so full of energy and when he starts playing that violin you can’t help but get up and dance. He does mostly covers but what he does with them is amazing. His recorded music is great but there’s nothing like watching him feed off the crowd when he is playing. There’s just no way to describe how he does what he does, you’ll just have to see it for yourself. We saw him play at Vinyl this past weekend and he never fails to put on a great show. As our time here in New Zealand is quickly coming to as end, I am glad his show is one of the last things we did in Queenstown.

Check out his Facebook for the latest performance dates.

The times I got to hear Mathias play his piano at the lakefront in Queenstown, his music was always so beautiful and moving. I know little about Mathias except that his piano is an old refurbished upright he got from the recycling centre, that he fixed and learned to tune himself, and his music is phenomenal. You can’t help but stop and listen when you hear him play. Watch the video below to get a feel for who he is and just what his music means to him. It’s an honour to have had the chances we did to hear him play.

This is the first place in the world to see the sunrise. It is the closest accessible eastern place to the International Date Line, which means, technically, this is where the sunrises first on a new day. It’s quite the scenic drive and reminded me of the Great Ocean Road in Australia. How many people have you met that can say they were the first people in the world to see the sunrise?
Also check out the East Cape lighthouse while you’re in the area. If you can, try to get up there for sunrise, we unfortunately didn’t but I think the view would be incredible. Its 800 steps up and 800 steps back down and takes about 30-40 minutes return depending how often you stop or how long you take taking photos.

We never did get around to doing any of the other Great Walks we wanted to do such as the Mueller Hut at Mount Cook, or the Routeburn Track. But we did do the Tongariro Alpine Crossing, which is part of the Tongariro Northern Circuit. Mt. Tongariro was used as Mt. Doom in the Lord of the Rings movies and you can see why when you’re up there. It’s a single day hike that takes around 7 hours and it’s considered an advanced track to DOC (Department of Conservation). The landscape is indescribable and so out of this world; it is well worth the effort.

There are different options when it comes to experiencing the Maori culture. We were lucky enough to be able to have personal experiences thanks to Stray who include two cultural stays in most of their packages.

Based out of Piahia, north of Auckland, in the Bay of Islands, this converted car ferry is now a full-blown floating hostel, with a bar, pool table, private rooms and 4 bed dorm rooms, attracting people of all ages. This is hands down one of our favourite experiences. It’s a one night, two-day tour that includes dinner, breakfast and lunch, and activities include fishing off the back deck, night kayaking/swimming to see the phosphorescence, snorkelling, tasting freshly collected ‘kina’ (sea urchin), and for a lucky few, swimming with dolphins. We were lucky enough to be in the water with a pod of four, for almost an hour and were less than a couple of feet away at times. All in all, this was an incredible experience that we highly recommend.
Check our their Facebook page or website for more info.

This is probably one of my favourite roads trips. I couldn’t stop looking out the window, in awe of the landscape. I was like a kid seeing the world from an airplane for the first time, realizing just how small we really are. Unfortunately both times the weather wasn’t that great, which doesn’t make for the best photographs but I’d say a rainy day may be better than a nice day as there are no waterfalls without rain. When it rains there are thousands of waterfalls everywhere, and I mean everywhere, it’s seriously out of this world. You can’t really capture the grandeur of it all in a photograph anyway, but I sure tried. 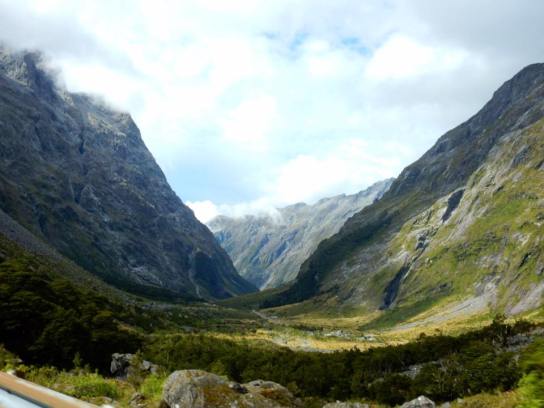 The drive through the Fiordlands is exactly what I needed at the time. We have been on the road for so long now that everything has started to feel normal. Travelling and backpacking has become our everyday life so its inevitable that we’d lose the appreciation we once had for even the smallest of things. But it’s things like this that remind us of why we’re still travelling. There are times when I wonder why we’re still going; why haven’t we gone home like everyone else we’ve met along the way, when things just… feel average, and that feeling I used to get when I first came abroad doesn’t come around much anymore. But then you see something like this, something that’s out of this world and its all comes back, washing over you like a hot shower on a cold day, that warm fuzzy feeling that makes you sigh and think “ahhh, there it is”, like a hug from an old friend you haven’t seen in a while. And that’s what keeps you going, that’s why we keep travelling, keep moving, keep exploring, to keep that feeling coming back.

I don’t know how to tell you where exactly this waterfall is other than
it’s just off the road to the Tasman Glacier in Mt. Cook National Park and looks like this: 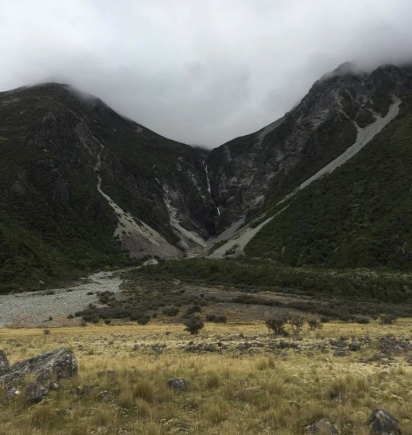 from the road. It’s quite the hike, easy but there is no path or anything, you just kind of have to fumble your way over the rocks that lead up to the waterfall, and you’ll probably get wet. There is no parking either, we just pulled off and parked on the side of the highway. It’s a hidden gem and well worth checking out and you won’t have to fight the crowds for a good view as you will most likely be the only ones crazy enough to walk up there.

Not quite on the tourist trail, this black sand beach is only worth visiting at low tide, which we unfortunately guessed wrong. Make sure to Google low tide times before making the drive out. We got there as the tide was coming in so we almost had to swim back to the car and we didn’t quite get an up close look at Elephant Rock but could see it down the beach past where the tide had already come in. It looks so much like an elephant its crazy! Good work Mother Nature, you’re sculpting skills are on point. 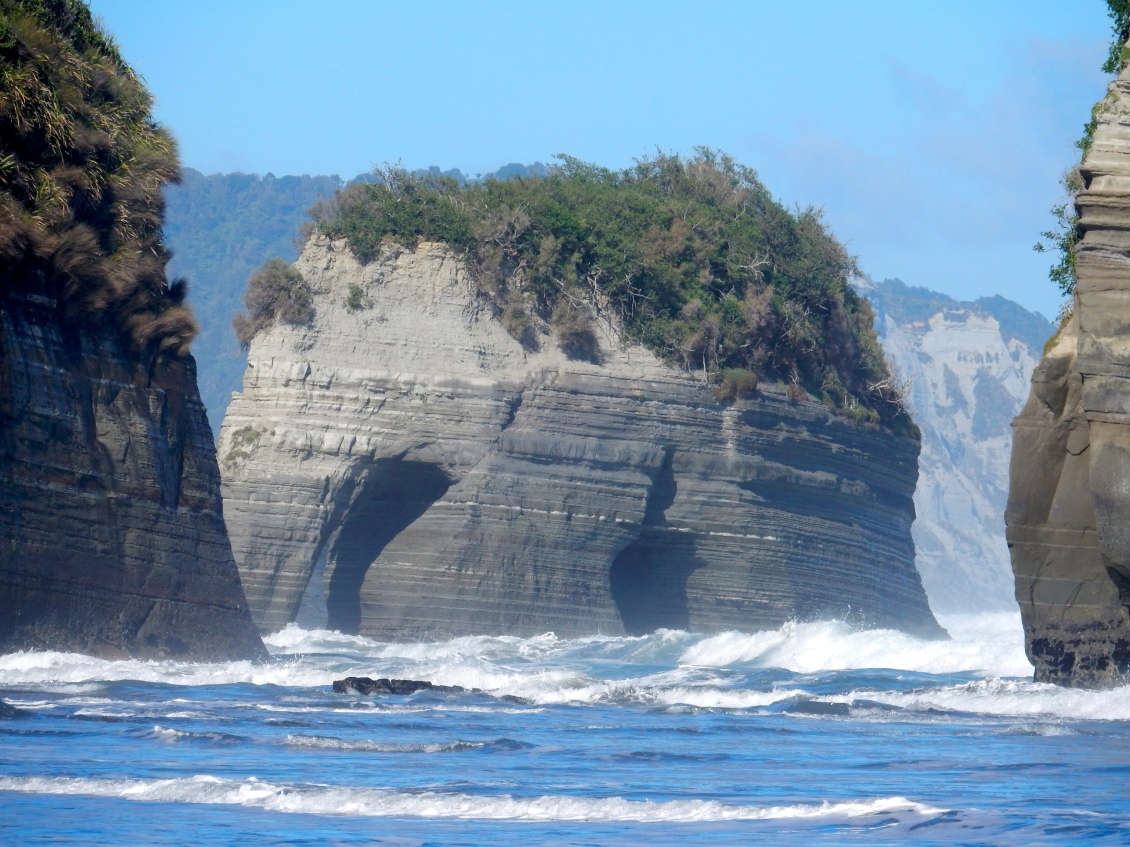 Located on Tongaporutu Beach, turn off state highway 3, down Clifton Road, about 15 minutes south of Mokau or 50 minutes from New Plymouth.

Just outside Kaikoura, 20 minutes North on state highway one, at Ohau viewing point, is a Fur Seal Colony of upwards 100 seals. We were lucky enough to see pups playing around in the rock pools. They were so cute! We stayed and watched them play for quiet some time, watching them jump into the pools then crawl back out and do it again. It was great to see them active as all the other times we’ve seen seals they’ve just been laying about not doing much.

Jade is quite precious and common in New Zealand and you can find it sold in most souvenir stores or markets. We got the chance to carve our own pieces of jewelry while on the Stray bus and I highly recommend it. Jade is a really hard stone so it takes a while to sand it down into the shape that you want, making it really tedious work and you’ll need a lot of patience. Doing a Jade carving class gives you a greater appreciation for all the pieces you see on sale at the markets and what not, each piece taking an artist over an hour, and the smaller the piece the harder the work.
The class we took had a maximum of three people and the guys workshop was in the middle of nowhere but close to Pancake Rocks on the west coast of the South Island. If your interested and would like more information send us an email at followingaea@gmail.com.

People ask us a lot which country we like better, Australia or New Zealand beacuse they’re so similar, and I used to say Australia but now I’d say New Zealand. It has become our home away from home and there will always be a longing in our hearts to be back here, but it’s time for a new adventure and you never now, maybe one day we’ll be back for good but until then Ka kite anō and Kia Kaha (See you soon and stay strong).

One thought on “Aotearoa: What we’ll always remember.”

A few favourites from Mexico 🌴☀️🤍
Who says the backpacks have to retire when you have a baby?
Forever my Valentine(s) 🤍✨
First Christmas as the three of us 🥰🎄✨