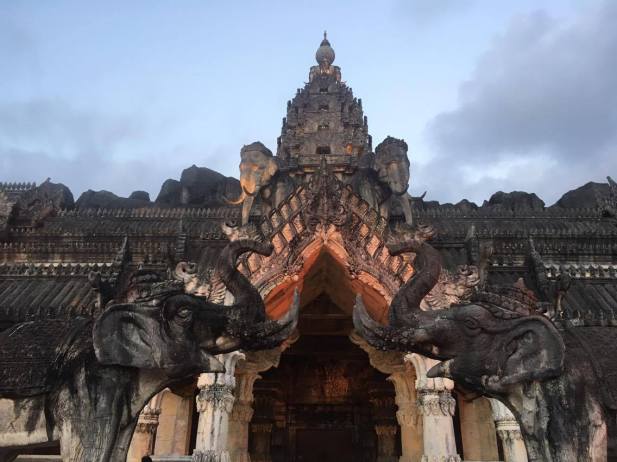 The other day we decided to get real touristy, something we don’t do often, and go see FantaSea, a mini Asian version of Disneyland minus the rides. It’s a bit pricey for a backpacker budget but we were looking for something to do last-minute and it was advertised as a ‘must see’ show in Phuket.

The whole place is so colourful, everything in their Carnival Village is neon, and it feels like someone was on magic mushrooms when designing the place. There are many things to do before the show starts like playing classic carnival games to win stuffed animals, shopping in one of their many clothing, toys, or jewelry stores, dressing in traditional Thai clothing and have your photo taken, or walking through their animal exhibit. 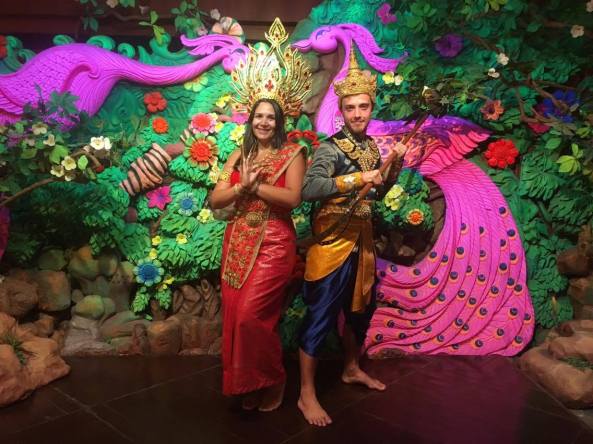 The main attraction is a Vegas style show loaded with special effects, and traditional attire. The story is called Fantasy of a Kingdom and is based on old tales of an ancient kingdom of Kamala (full synopsis here).

The show itself is good entertainment although it’s hard to follow along with the story line, we had a hard time figuring out what things represented. It’s no Cirque du Soleil but it was cool to see the traditional dancing and costumes.

The buffet was actually quite nice, having a lot of options, both western and Thai. It was a good chance for us to try different Thai foods without having to order a whole dish with the risk of not liking it. They have a seafood buffet option as well but we chose not to indulge as the upgrade was an extra 1,100 THB. There are other restaurants to choose from but the buffet is as add on option as part of a package deal when purchasing show tickets.

Things we weren’t too keen about: 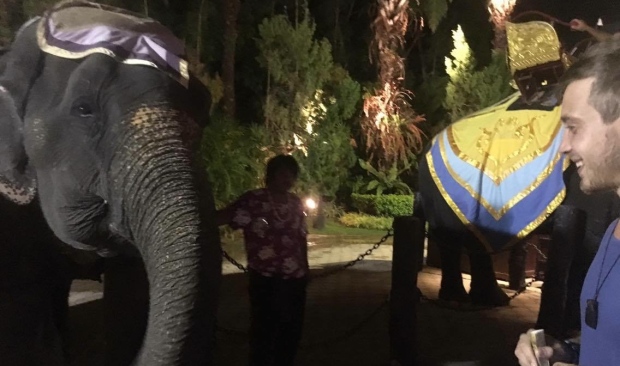 All in all the experience as a whole was alright; the only thing that brought down our personal experience were the animals and how they may or may not be treated. But it’s up to you to decide what you feel comfortable with. It’s your choice to decide where you want your money to go, but in our opinion as travellers, we need to be conscious of what we’re supporting. The choices we make affect the world of tourism and the countries we visit. It’s only because of us that they feel the need to lock up these animals and to galavant them around for entertainment. That being said, the show was good, all of the staff were helpful, friendly, and always smiling, pre show entertainment was fun and being able to dress up in traditional Thai clothing was a unique experience I’m sure we won’t get again, but we didn’t leave feeling all that great about what our money went to.

{ We’ve decided to use suns instead of stars for our ratings. We are The Endless Summer after all. }

We’re giving FantaSea as a whole a 3/5 rating because the theme park itself is good fun but the exploitation of what should be, wild animals, for our entertainment just did not sit right with us and we probably wouldn’t pay for it again.

Book online, at your accommodation or at any street stand selling tours.