When we started island hopping around Greece, we really had no set plan on where we were going, what islands we were going to visit or how long we would stay in Greece. All we had was a list of places we wanted to go/see.

So, when we got to Paros, we had no onward journey booked and we didn’t even know what island we were going to go to next. We just started looking for the cheapest accommodation and ferry prices for surrounding islands, and that’s how we ended up on Naxos.

Naxos is less than an hours ferry ride from Paros, it’s relatively the same in personality, same in price for food and accommodation, but it slightly bigger than its neighbour.

On the morning of the 16th (July) we caught the ferry over to Naxos. One thing we’ve quickly learnt is that the ferries in Greece are almost always late and this ferry was no exception, it was nearly 45 minutes late! Good thing we weren’t in a rush! 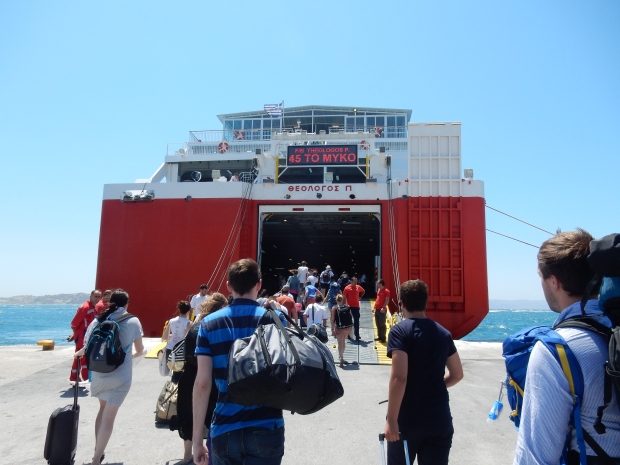 But anyway, we arrived into Naxos by noon and were greeted by our hotels shuttle service. Although the hotel wasn’t far from the port, it was a nice change not to have to walk uphill and in the blaring sun with our backpacks.

We stayed at Soula Apartments, where we originally booked two beds in a dorm room but somehow got lucky and were given a private double room; which we weren’t going to complain about. Our apartment was only a couple of minutes from the beach, shops, restaurants and the main area of town. So of course and per usual, once we were checked-in we dropped our bags, changed into our swimmers, and headed out for some lunch and the beach. Needless to say we spent our first day on the island lounging on the beach.

It was on Naxos that we found our favourite restaurant. They had the most garlic-y tzatziki ever! It was sooooo good, we ate there for nearly every meal, no joke. It was called Gyro Gryo, it was in the little square not far from our hotel, it really doesn’t look like anything special but trust us, we highly recommend anyone heading to Naxos to go to this little spot. Our mouths are watering just thinking about it.

Our second day, and first full day on the island we – surprise, surprise – slept in *insert shocked faces here*, grabbed some late breakfast from a little cafe and walked over to the Temple of Apollo (or Apollo’s Gate), which is by the port in the town of Naxos (only a 10-15 minute walk from our hotel). 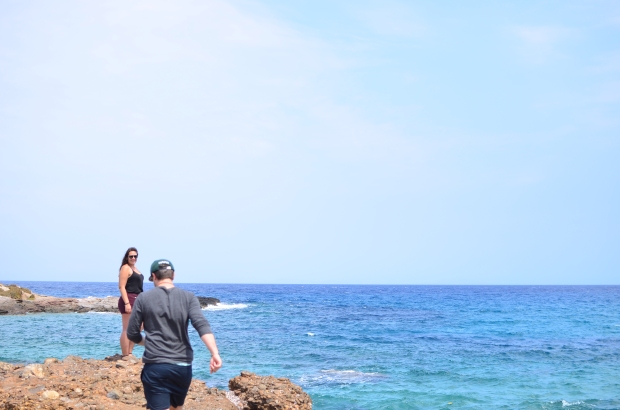 We’re not sure of the history because there isn’t any information at the site itself but it’s not much of a temple anymore. The only thing left standing is a door like structure, surrounded by large stones which once must have made up the rest of the temple. It’s really quite cool to see though, and very picturesque. 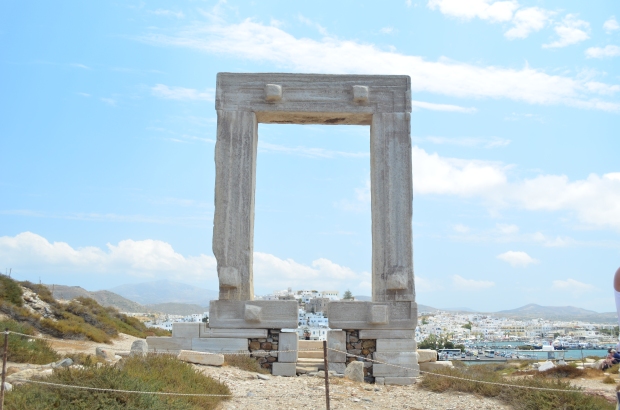 Can you guys guess what we did next?

Yeah … we went to the beach.

Because Naxos is bigger than Paros, the main town doesn’t really have the same small village feel. So instead of wandering little passage ways and getting lost down cobble stone streets, we spent our time at the beach, soaking up as much of the Greek sun as possible.

We spent the evening sipping cocktails, editing, and watching the sunset while sitting by the beach. It’s really starting to feel like our time in Greece is a holiday rather than a backpacking trip. We could get used to this. 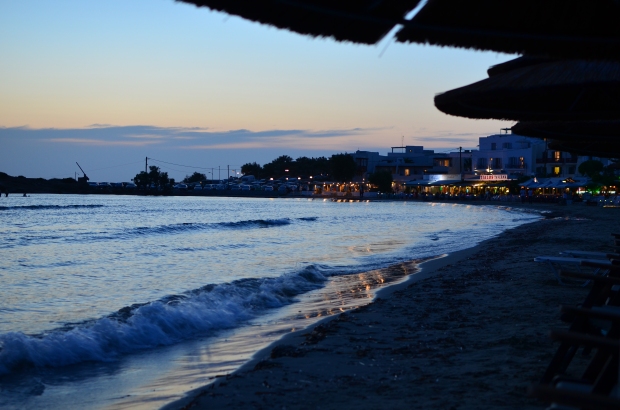 A short walk from the beach was an abandoned restaurant. We had seen several people up there so on our last day on the island we decided to head up to it and have a look around. 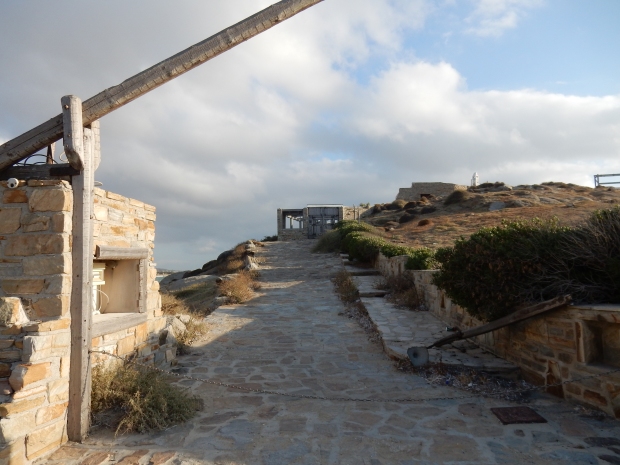 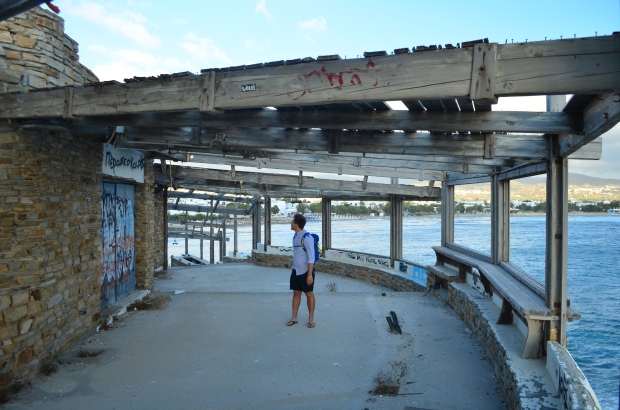 The restaurant must have been pretty nice, and we can’t imagine why it would have closed because the views the place offers are so nice! There really wasn’t much to explore but we walked around what we could. Later that evening we had dinner by the beach and asked the waitress why it was left to ruin but she or her boss didn’t know. Our guess is that it might have been during Greeces economic crash, but we’ll never know. 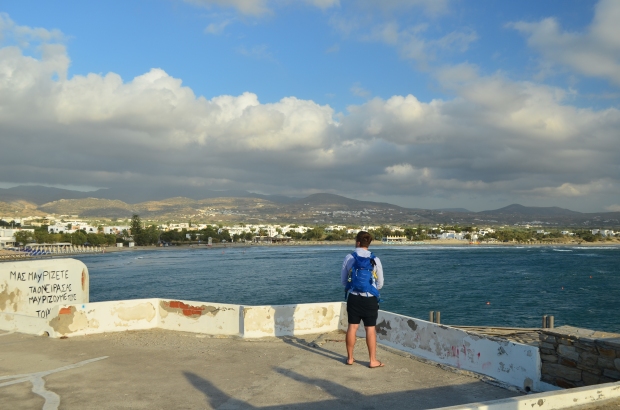 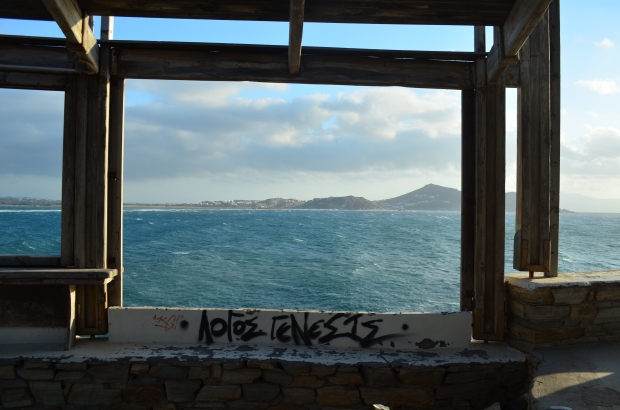 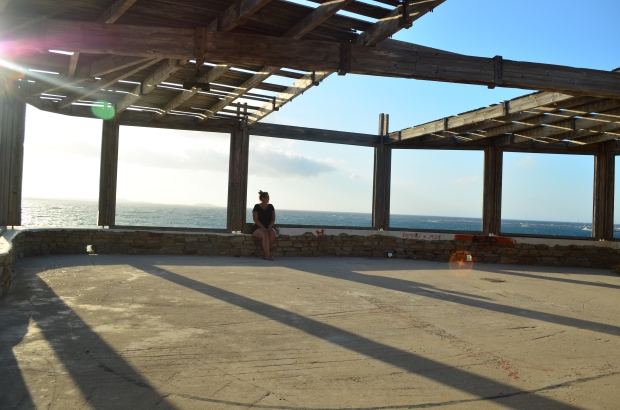 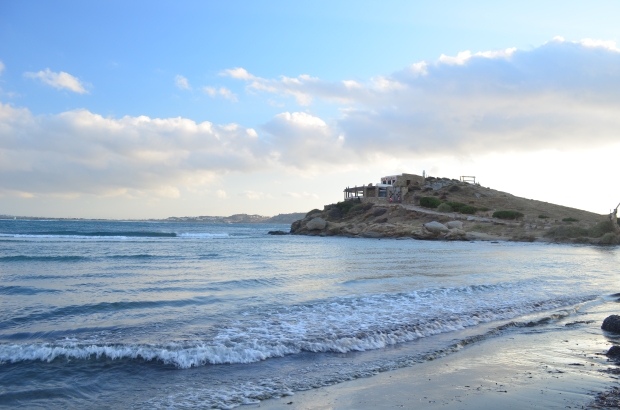 Oh yeah, it was on Naxos that we bought our drone. We had been humming and huhhing for months before our trip about whether or not to fork out the money and in the end decided against it. But, after further thinking, we decided to just do it. The way we see it, it’s an investment into our passion for photography, travel and showing people the places we explore.

We got the DJI Mavic Pro, it shoots in 4k or less, should you wish, the thing pretty much flies itself and the views we are now able to capture are unreal. We’re in love. 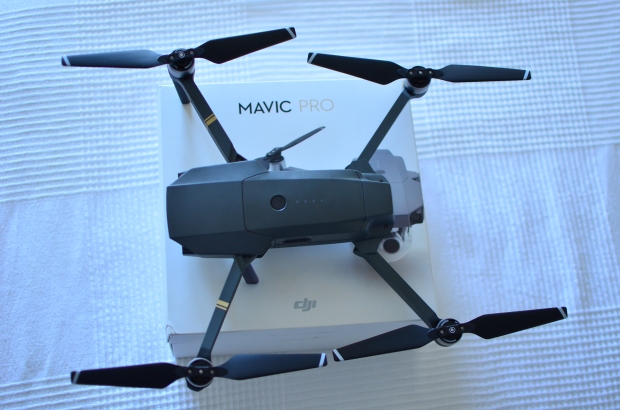 Trying to figure out where we would go from Naxos was tough. We wanted to get to both Mykonos and Santorini but both were proving a) expensive to get to; b) expensive to stay in and c) in opposite directions from Naxos. In the end we chose to head to Mykonos from Naxos but only booked a hotel for two nights because it was too expensive to stay our usual 3 nights. We did manage to book an early ferry from Naxos to Mykonos though, which in the end, pretty much gave us two full days. We’ll then head straight for Santorini after Mykonos, but more on that in the next post.