Hue to Hoi An via the Ho Chi Minh Trail by Motorbike. 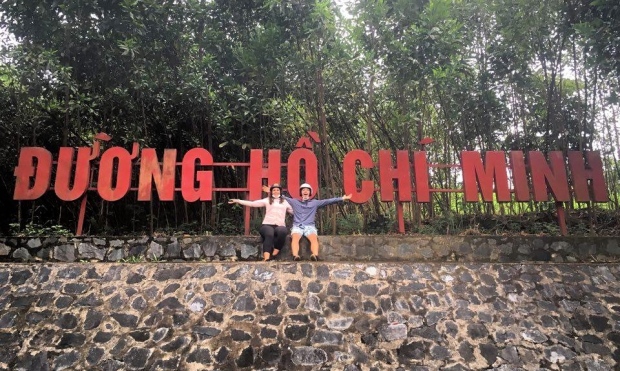 We decided to do this leg of the journey a little differently to our normal modes of transport. Although I get the feeling that everyone else decides to do this also, due to the large amount of people in the street offering it. Of course, I’m talking about riding a motorbike through Vietnam. 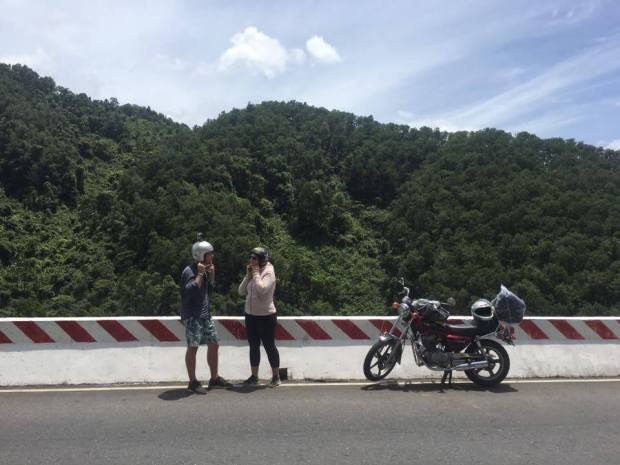 At first we thought we’d go with the ‘Easy Riders’; but after struggling to find out whether it was an actual company, or just a term used to describe the idea of doing a guided motorbike tour, and having consulted a few different places, we decided to just book it through our hotel where we were staying: Ngoc Hung Backpacker Hotel, (Book here). A nice enough place, with cheap rooms, a free breakfast and helpful staff. They were more than happy to help, as you can no doubt imagine. Amongst all the heckling in the street for “Easy rider?” or “You want motorbike?”, it was nice to not be coerced into doing it.

I wanted to ride the motorbike and Bry just wanted to be a passenger, as the one and only time she tried to ride one was before we met. And well, I’ll let you ask her about that one. 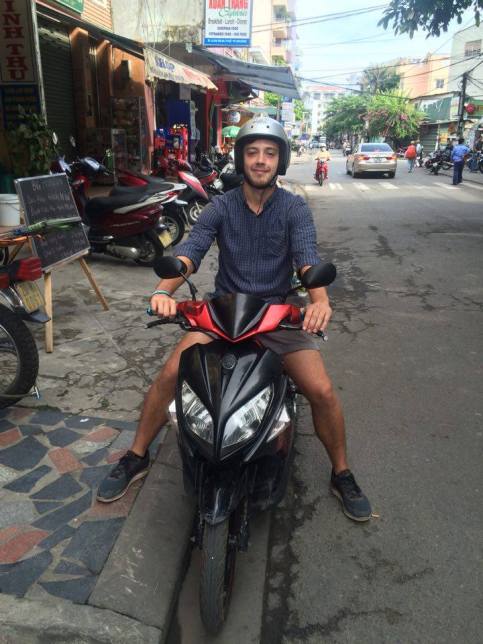 Naturally, the guy at the hotel had a friend who did the motorbike tours and he set us up with a 2 day, 1 night guided tour from Hué to Hoi An via the Ho Chi Minh Trail; through the mountains, stopping overnight in Prao, than continuing on to see the Marble Mountains, Hai Van pass and finally arriving in Hoi An, taking us right to our hotel. He even arranged for our big bags to be delivered there, so we only needed to take a small day pack.

We left the next day.

I was a bit sceptical about riding a motorbike, which I’ve not done since my early teens, in a place where the roads are utter chaos. However to both Bry’s and my surprise I managed to traverse the pandemonium and we made it out of Hué unscathed. Bry was riding on the back of our guide, Rin’s bike, (pronounced Reen), as we both thought it best while I re-established myself with the constant battle of trying not to crash. Beep beep.

We were provided with helmets and while we didn’t even think about it, we could have got more protection had we asked.

Having left relatively early (8am), and having ridden for a couple of hours already, we took a break around 10:30/11 for a drink and hopefully a chance to go swimming in a waterfall. While we weren’t expecting anything on the scale of the Kuang Si waterfall in Luang Prabang, Laos, I think we at least were expecting something of significance. It’s safe to say, we didn’t go swimming in a ‘waterfall’, we didn’t go swimming at all. It was more like Rapids, full of rocks. And the water was disgusting. After riding for a while longer, we stopped for dinner in a quiet village, It was super cheap, not normally the kind of place we’d eat, but we were a bit stuck for choice.

We continued our quest onto the Ho Chi Minh Trail and up into the mountains, which left for some stunning views, an amazing ride and some pretty great pictures. The road was actually in really good condition which is surprising, as you probably know, good roads are hard to come by in SE Asia. It felt so good just rolling through the bends, swaying left and right with the twists and turns.

Not too long after this photo was taken, the inevitable happened. The rain came. It was like a train, you could hear it rumbling through the mountains, then all of a sudden it was upon us; big, heavy droplets, soaking us instantly. We quickly pulled over and adorned the waterproofs that Rin was carrying for us, to no avail. It was too heavy.

No sooner than the rain began, it was drawing to a close, the road drying up, and we were able to resume normal riding. 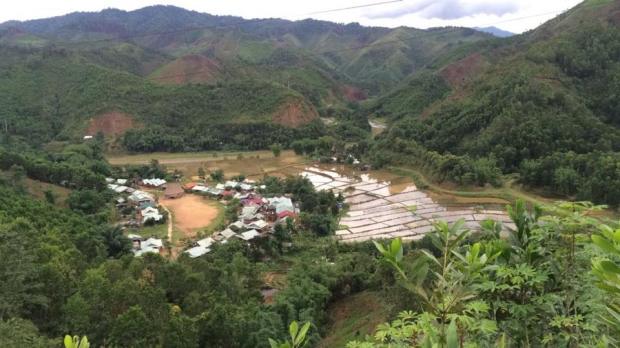 That afternoon we stopped in a small village where the whole population is that of one family; there must have been 20 houses and countless people of all ages. Earlier in the day, Rin had bought us some fruit, but also some rice crackers that weren’t for us. So we were giving these to the family members as a gift. Although feeling slightly intrusive; we walked around and took a few pictures. It was certainly interesting to see such a huge family in one place. 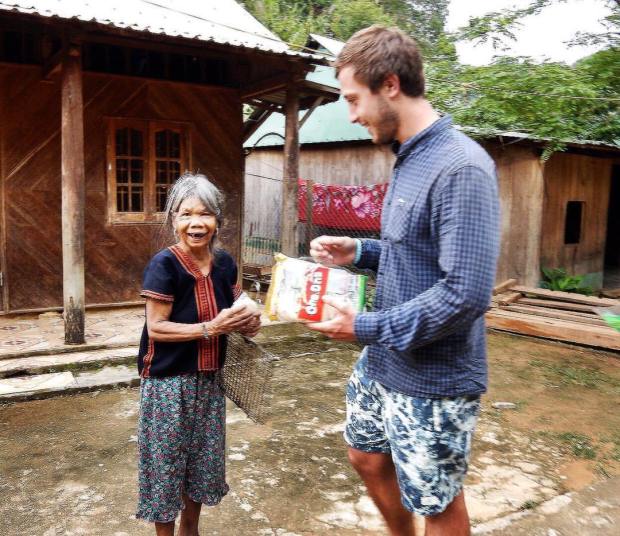 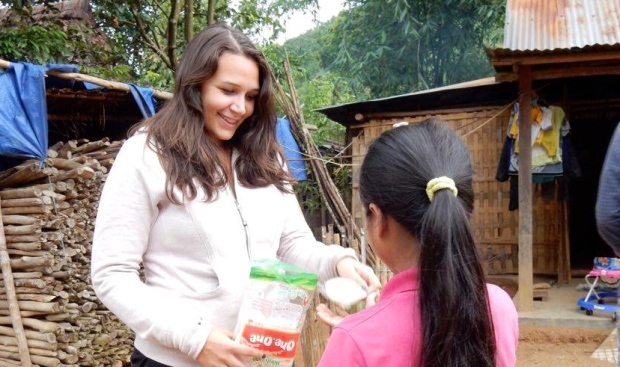 Just a few hundred metres down the road is the Ho Chi Minh Trail sign where we took more photos before heading on towards our final stop for the day. Oh yeah and Rin let me ride his bike to.

We overnighted in Prao, a mountain town that we didn’t see much of. The accommodation that was included in our total cost of the trip was pretty good, nice size room, good air con/wifi/en suite. All we had to pay for were the meals. For our tea, Rin had asked them to do us some ‘mountain chicken’ or at least that’s what I think he was saying. The food tasted really good and there was plenty of it. Although I didn’t quite fancy a deep-fried chicken head.

We left around 7:30 the next morning to begin our ride towards Hoi An, once again taking the beautifully quiet Ho Chi Minh Trail. And not 10 minutes down the road, we came slowly to a stop as we ran out of petrol. Not to worry though, our hero rode off into the distance, returning mere moments later with a plastic water bottle full of petrol which took us to the nearest station. Here, Rin also showed us a tea farm, just vast expanses of Vietnam style tea trees. It was kind of mesmerizing.

Back on the road. Beep Beep.

Once again we begrudgingly rejoined civilization and headed up the Hai Van Pass, took some nice pictures at the top and stood in two different places at the same time (Danang and Hué). The view from the top was spectacular and it was a beautiful day to. A little further down the road we visited the Marble Mountains, which is amazing. Both are well worth a visit if you’re in the area. 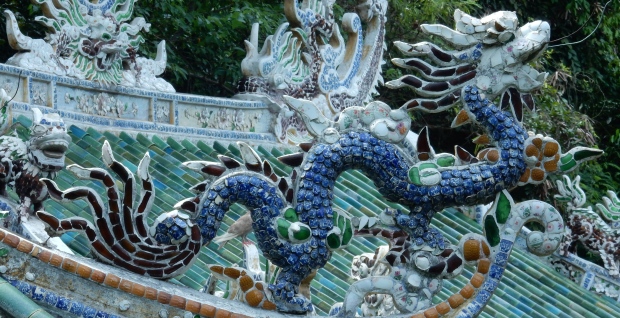 A quick-lunch stop and then on towards our hotel.

We managed to find it amongst the bustling streets of the Hoi An old town and began unloading our things, meanwhile, Rin had rung somebody and our bags were there within minutes.

Overall, we were extremely happy with our decision to do our trip this way; we’re super happy with Rin and would definitely recommend him to anyone wanting to do something similar. He caters to your requests/time restraints, and is just generally a nice guy. He’s always happy and laughing, and if you’d like to book anything with him don’t hesitate to ask us for his contact information.

Number of accidents: 0
Amount of other travellers we saw along the way: 2
Total number of bugs to the face: 8

One thought on “Three People, Two Bikes, One Road”

Couldn’t pick just one 🙈
And then there were three 💕☺️
He’s here ✨🥰
Wasn’t going to post these ones, but we just love these photos so much and for the first time in a long time I feel grateful for my body and for being able to house our teeny human. So I feel like that needs to have a permanent place on the feed 🤍✨