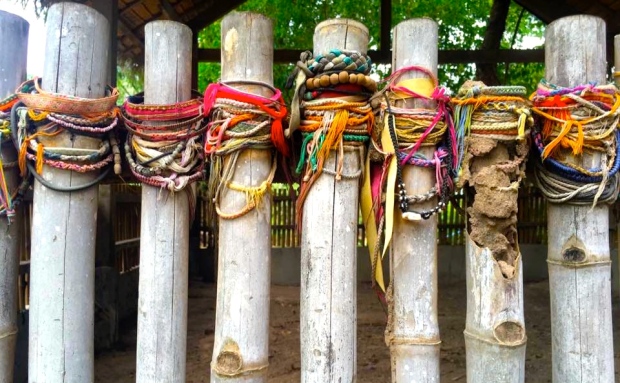 Deep, hollow pits, like ragged, rough, scars lay empty in a once unscathed landscape. Chickens run around pecking at insects while birds chirp peacefully in the distance. If you only look up to the sky and surrounding trees you’d never be able to tell what horrible things happened here.

Choeung Ek, the killing fields in Phnom Penh, the place where identity and dignity were stripped from men and women, and innocence from children. A place that has left physical and emotional scars on the country and the its people. But now, with the past behind them, Cambodians have moved on and, for the most part, are a happy, welcoming people. You could never tell that just 40 years ago what brutalities took place.

The mass graves, most that held a couple hundred people each, one that even held up to 450 people, now sit empty since they were rediscovered and exhumed in the 80’s; Deep, hollow scars, now over grown with grass and weeds, even flowers in some, as if they’re trying to heal.

Flies constantly pester you as if to be a constant reminder of where you are, that there were once hundreds of bodies here, piled like garbage and left to rot. My words might seem harsh but they are the truth and ignorance is not bliss.

Out of respect for the dead and the suffering they endured we did not take any photos of the graves. It’s not like a photo could capture any of it anyway. Not until you’re standing there, looking over a mass grave that held the bodies of over 100 women and their infants, can you feel the sadness of what’s happened here. The words ‘a picture doesn’t do it justice‘ falls short. 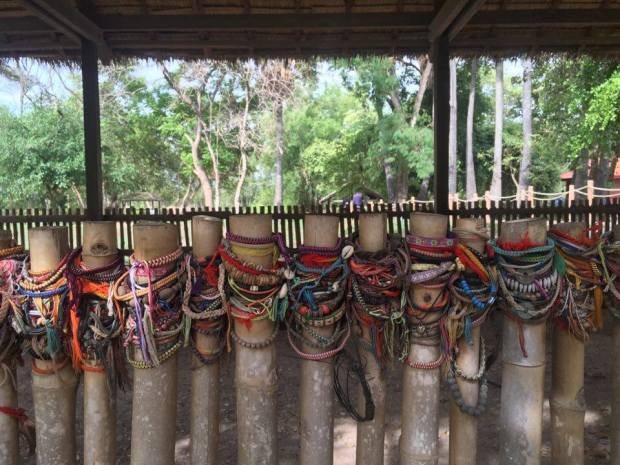 There are over 300 killing fields in Cambodia but this is the largest. Over 3 000 000 people died in the 3 years 8 months and 20 days of Pol Pots Khmer Regime. Most were tortured, some were sent to work camps just like in Germany, where they we’re given little to no food and worked 12 hours a day, if not more, and some were sent to camps like Choeung Ek, where they awaited death, blind folded and tied. Who suffered more is an impossible question. 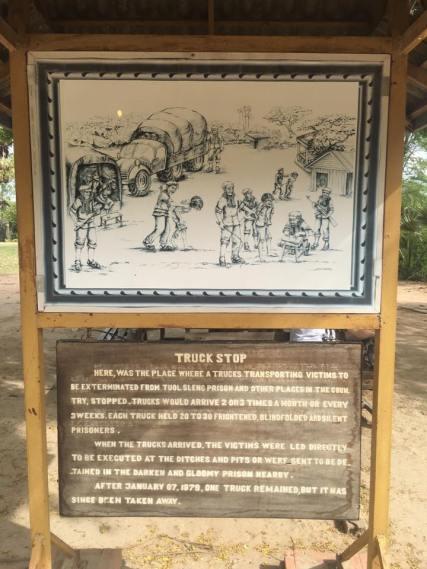 There was no regard for any life that did not fit into Pol Pots new regime. He was a very paranoid man so even if they did their best to mould into what he wanted, he still might have sent you to the the camps if he had any suspicion against you. Words said in a moment of anger by a fellow soldier or friend could cost you your life.

The people taken to the killing fields were categorized and kept track to make sure no one was missed or had escaped. Pol Pot wanted no one to survive, he wiped out entire families so that there was no one left to seek revenge. He even had the babies and children murdered, his reasoning is best said in one of his propaganda slogans “To dig up the grass, one must dig up the roots”. They were meticulous and organized but the actual acts of killing were primal, Stone Age, brutal, and messy.

Because the cost of bullets was too high they could only use what they had available; South East Asia is still like this today: Resourceful. Farming tools and things like machetes and steel poles were used in place of bullets. Victims were beaten and hacked while they knelt on the edges of their soon to be graves. Cambodians killing Cambodians. They were not always gone by the the time the soldiers pushed everyone into the mass graves but the DDT the soldiers used to mask the smell of the bodies finished off the task.

{ All the squares are mass graves }

How could anyone do this we asked ourselves. Not just to the men but the women, children and even babies. Pol Pot used the poor and promised them jobs and food. Most of the executioners were between the ages of 15-19 years old. They were brain washed into believing what they were doing was right. I mean what can you expect when you take the poor and suffering and tell them that these people (the victims) are the reason for their suffering.

Most of all he used fear, he threatened his soldiers with the lives of their families and their own. After the horrors they’ve seen and taken part in who would want to die that way. Fear does horrific things to people. We cannot be so quick to judge. Of course some soldiers defected, and some were lucky enough to fully escape but most were not and inevitably suffered the same fate of their victims.

A nasty form of retribution I suppose.

The scenery is quite nice to look at, all greenery and palm trees, until you look at the ground and see pieces of bone or strips of clothing, that have been unearthed over time. Bone and clothes are still being revealed to this day. The soil moves and settles with weather and time as if the souls of the dead can not find peace and lay forever un-rested. 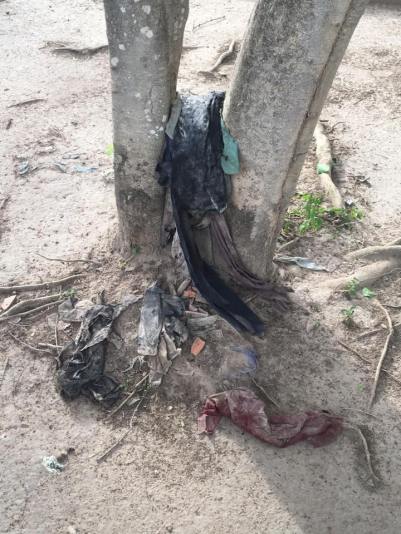 Included in the price of a ticket ($6 USD for foreigners) is an audio tour. You receive a narrowcaster and headphones at the door and then just follow the signs. The place is quite, not in people but in sound, it’s a graveyard after all and respect should be shown. Along with being informative about those sad and horrible years, there are recordings of first hand accounts to listen to, from both survivors and soldiers.

I cried when we listened to the story of a mother who survived the work camps but lost her 8 month old son, though I suppose in a way, she died in that camp the day she lost her son. The baby died because she could not feed him. She was made to work 12 hours a day and was given no food so she could not produce enough milk. One of the things we women are made to do for our children and to no fault of her own she could not. How consumingly heartbreaking is that.

Pol pot lived another 20 comfortable years before dying peacefully under house arrest. There’s speculation about how exactly he died, some think he was poisoned by his enemy’s or maybe even his disciples, regardless he died a much too easy death for the horrors he committed.

It took us over an hour to walk around the area. We took it slow to really take in our surroundings, stopping every once in a while to sit, listen to the recordings and absorb what we were listening to.

The last stop before the Memorial Stupa is at the “Magic Tree”, although no magic happened here. It was where a loud speaker hung to play propaganda music. It was to drown out the screams of the victims while they were murdered. On the narrowcaster was an example of what it would have sounded like, the music I mean, not the screams. There also would have been the sound of a loud generator for the lights above the graves. We listen to what would have been the last sounds these people would have heard. It was utterly eerie.

We left with damp checks and heavy hearts.

Going into Cambodia we knew we had very little time, like 4 days little. So we decided to only do two things; the killing fields in Phom Penh and Angkor in Siem Reap. The above was our experience at the Killing Fields. I didn’t want to get into the history of it all because it would have made for a long post, but if you’re wanting more information about how and why such things took place this website has some simple information.