A few weeks ago we joined Contiki on their 6 day Okotberfest tour. It was a great week filled with tons of beer, great food, and awesome people. Although convincing Will to do a group tour was like convincing him to eat pickles, in the end we were both really glad we decided to go with Contiki. We are so used to planning everything ourselves and going it alone that it was nice to let someone else do it for us this time. 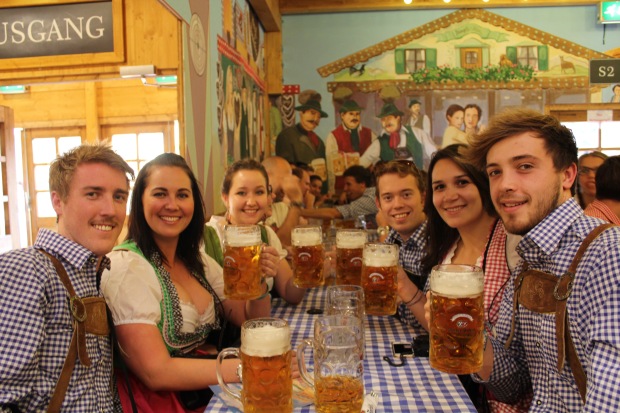 Not only did we meet a great group of people but everything was sorted for us; we didn’t have to worry about finding accommodation during such a busy time, Contiki ran shuttles to and from the festival all day from our hostel, breakfast was included, they helped us find proper attire (Dirndls and Lederhosen), and they also had other (optional) organized day trips such as Dachau Concentration Camp, Mikes Bikes tours, and Neuschwanstein Castle. It was all hassle free and the only thing we had to do was relax and have a great time.

Before leaving we had been trying to decide whether or not to buy Dirndls and Lederhosen in advance because we had heard how pricey they could be in Munich during the festival. In the end we ended up waiting and I’m glad we did because all sizes are different based on brands.

Luckily, one of the first things our Contiki trip manager did was show/help us find where to buy everything we needed.

Dirndls can cost anywhere from 30.00 – 200.00 Euros or more. I found mine for 110.00 but another girl found one for 30.00. It really just depends on where you look and what size you are. There are so many different designs and colours, lengths and different under shirts, it really is an indecisive persons worst nightmare! Traditional colours are pink, red, green and blue, but you can literally find them in any colour. I tell ya! If I lived in Munich I would have an entire closest just for my Dirndls!

It made me wonder just how many local girls actually have, so when we met Sarah and Veronica, two Munich locals, we asked.

Needless to say the rest of us girls were pretty jealous. It was also from Sarah and Veronica that we learned how Dirndls should really fit. Apparently mine was too big, “Too much space” they said pointing to my chest.

“When you wear them they’re so tight that you can’t breathe, you can’t eat, you can’t even drink beer!” Veronica said, laughing.

“They’re all about the boobs and the hips!”

I really couldn’t tell you what the price ranges are on Lederhosen but they probably run for about the same as most dirndls. Will got the shorts and a shirt for 105.00 Euros and that was cheaper than the few other places we looked at. The shorts were really heavy-duty leather but the shirt was nothing special, it honestly just felt like cheap fabric, although beer seemed to roll right off of it rather than soak in. Whether that was intentional or not, I’m not sure.

It’s not mandatory to dress up but it does add to the experience (in our opinion). There were locals and foreigners alike that were not wearing the traditional clothing, but the majority of people were. We’d probably say about 90% were wearing Dirndls or Lederhosen. 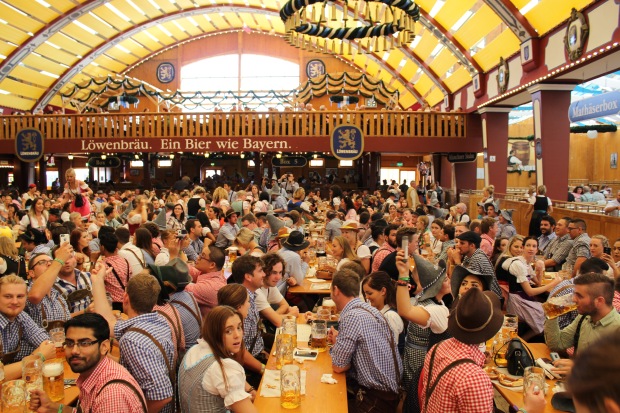 If you’re really budget conscious just go on a hunt for the 30.00 Euro ones (apparently you can find them at the main Train Station but I couldn’t tell you the details), order online, or you can even rent them (from where, I’m not entirely sure, but our Contiki guide did say it was possible). And besides, if you do end up coughing up the money for one, they’ll make great Halloween costumes! Reduce, Reuse, Recycle – Am  I right?

Our first full day at the festival was what the Contiki guides called Contikifest. We all gathered in the Lowenbrau tent where there were so many of us that we took up at least 1/4 of the tent! There must have been hundreds of just Contiki people in this one corner.

{ On the left, our awesome Contiki Tour Managers. }

We were there from 10am till about 9pm. NOTE: The festival is open from 9am, last drinks is at 10:30pm and tents close at 11pm. The only reason we left early was because, someone – not mentioning any names – had a bit too much beer and peaked a bit too early. 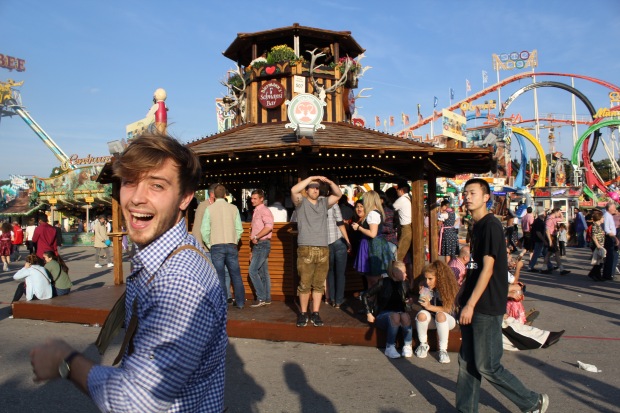 It was a great day and we were all up, dancing and singing on the benches by late afternoon. NOTE: You’re not allowed to stand on the tables but you can stand and dance on the benches all you want. 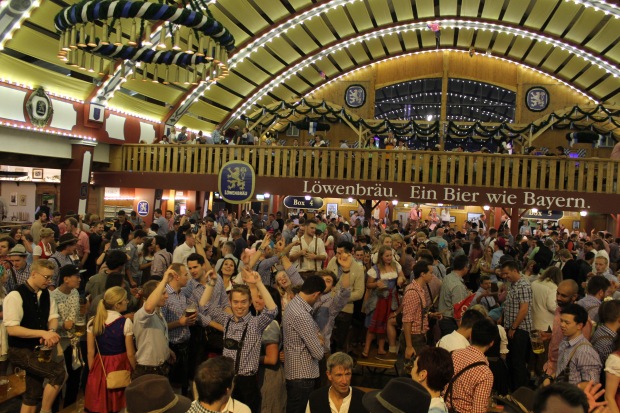 A bit about the Beer

Every year millions of people flock to Oktoberfest in search for the liquid gold served in giant steins and each year about 6 million litres of it is drank. There are 14 tents and all the beer tastes pretty much the same. This is because of the Bavarian Purity Requirements that have been in place since the 16th century. It says that Bavarian beer should only be brewed with water, barley and hops. There are no additives, no extra sugars or flavours, just pure, plain and simple Beer.

We were also told that the beer brewed for Oktoberfest is brewed a bit stronger than normal. It’s debatable exactly how much stronger it is but it’s somewhere between 3-5%, making the beer about 7-10%. So for someone not used to drinking beer, a couple steins and you may find yourself on the floor!

Not to worry though, if you are like me, and not normally a huge beer drinker. Most tents do what they call Radlers; half beer, half lemonade. They’re the same price, just a bit sweeter, and because the beer there is brewed so simply, it doesn’t have that strong beer taste like most beer at home. I found it to be quite enjoyable to drink. 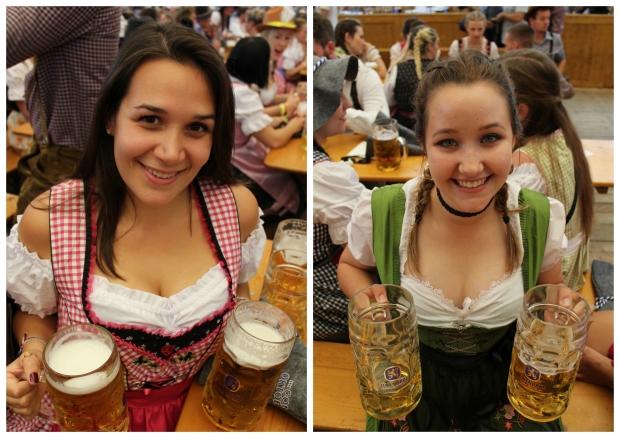 Of all 14 tents we only made it to about 6. We had all intention of making it to more but the tents get so busy that once you get a table, you don’t really want to move and loose the table that took you so long to get in the first place, to only find yourself walking around another tent for ages looking for another one. It might not be so bad if it’s only one or two of you but we were usually a group of 6-8 people so finding a table big enough to fit us all was a bit tricky – we usually took up a whole table. 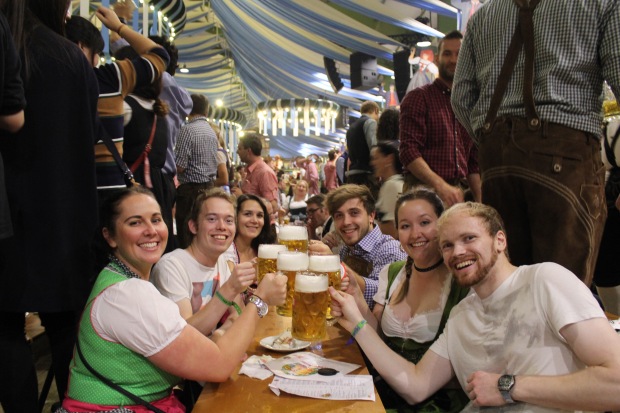 The tents we did make it to were:

All the tents we went to were great, people were always dancing by the evenings, the German locals we ended up sitting with a couple of times were super friendly. Some tents had more German locals than others, so the music was usually sang in German. Not that that is a bad thing but after you’ve had a few beers all you want to do it get up on the benches and sing along while dancing, and that was easier done at HB or Lowenbrau.

The atmosphere of the whole festival was great, we never saw any fights, everyone was nothing but cheerful and friendly, and even the police that were on guard in their van by the train station played fun music out of their loud speakers while people left the festival grounds.

All in all, it was such a good week and we highly recommend going with Contiki. 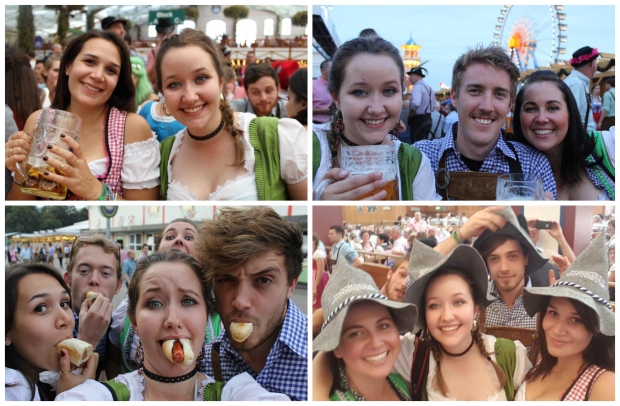 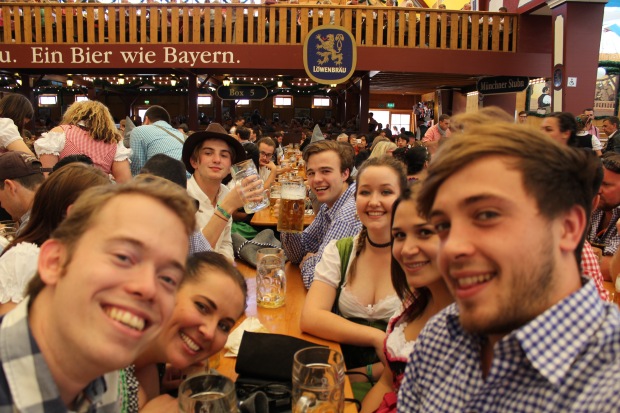