We’re in Greece! EEK! We’re super stoked about it and can’t wait to hit the Islands. But boy was it hard to get here! 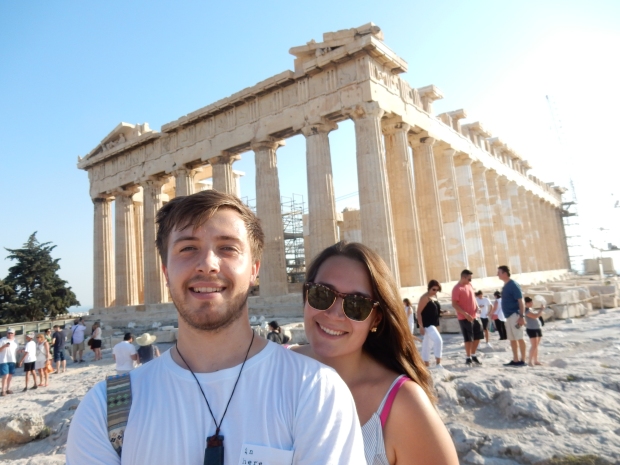 We decided to head down to Greece when we were in Budapest but were humming and huh-ing about how to get here. After some researching and googling we were pretty frustrated, because as it turns out … it’s not that easy to get to Greece from Budapest for cheap.

In the end we decided to go through Romania then down into Bulgaria and then into Greece from there. But what we didn’t expect was that we’d do most of it within 24 hours.

We got to Romania Friday and then left Sunday morning; like EARLY Sunday morning. Literally nothing was booked when we left the hostel at 5:30am that Sunday morning. All we knew was that we wanted to get a bus to Sofia, Bulgaria, catch a train to Thessaloniki, Greece, than catch another train to Athens.

So, we rocked up to the very quiet, very empty, coach station in Bucharest at about 6 am, half asleep, looking lost and wondering how we were supposed to buy our tickets. Luckily some man, who ended up being the bus driver, saw us and in broken English we managed to buy our way onto the bus. Although we’re pretty sure the guy just pocketed the money and let us on, because we didn’t get any tickets or proof of purchase.

Bucharest to Sofia by bus takes about 6.5 hours so we arrived around 1:00pm. As luck would have it the bus station and the train station are seconds from each other, so we only had to walk across the road to get to where we needed to be to catch the train.

We bought our tickets for the 3:00pm train to Athens, although it wasn’t a straight journey. The first leg was on a train from Sofia to a place called Kulata, a tiny tiny town on the Bulgarian side of the Greek border. The train was old, rusted, smelly, and covered with graffiti. It really looked like something you’d find abandoned on railroad tracks that are no longer in use.

This part of the journey was the worst I think. During the entire 6 and a bit hour journey, the very, very hot sun was shining directly onto the side of the train where all of the seats were. There were no curtains, no air con, and the air that came in through the window was just as hot as the air in cabin. So for the time that we were on this train, we might as well have been in a sauna. Oh yeah, and we only brought one large bottle of water with us, because we’ve only ever needed one bottle on previous trains/buses, forgetting that those other journeys weren’t done in 40 degree heat.

Anyway, when we arrived to Kulata we had to get off the train and onto a bus that took us over the border. Once across the border and in Greece we were dropped at a small rural train station and told to wait. Luckily there were about 20 other people all on the same journey as us, other wise we would have been very skeptical of the whole experience.

By this time we were drenched in sweat and now out of water. The train station we were at was just a small building and some train tracks that honestly didn’t look that used. Needless to say there was nowhere to buy water and as desperate as we were, we weren’t willing to drink the water out of the sketchy tap on the side of the building. By this time it was about 8pm but we still had another 10 hours on the train to go; we weren’t due into Athens until 6:00am.

When the train finally arrived (nearly two hours late) we were happily surprised, the train was definitely an upgrade from the last one; comfy-ish seats and air con!

Now fast forward 10 hours and we safely arrived into Athens. It was about half past 6 in the morning when we got to the hostel;  once again, sweaty, half asleep and looking lost. We weren’t able to check in until 1pm so we found some couches and passed the fuck out. Fortunately we think the person working the desk felt bad for us because they let us into our room around 11.

And now here we are. Or rather there we were. By the time you’re reading this we’ll be on Paros, an island 4 hours south east of Athens by ferry.

Don’t forget to check out our latest video on YouTube from Prague. We’ll have another one up shortly of Budapest.

Or sign up via email right here on the blog for weekly updates.

No one else I’d rather climb mountains with (especially at 6 months preggers🙈) 💕⛰✨⁣
We’re having a ... 💙 💕⁣
Good thing babies fly for free! ✈️✨ Newest carry on coming August 2021 👶🏼🧳 ⁣
✨Currently dreaming of New York 🗽✨⁣⁣⁣⁣⁣⁣⁣⁣